In this featured episode of Bid Out Podcast, host Peter Haynes chats with Robbie Pryde, Vice Chair and Head of Corporate and Investment Banking at TD Securities, on the latest developments in investment banking. They also discuss the priorities of CEOs in a post-pandemic environment, the surprisingly strong calendar of IPOs for Canada, and Robbie's leadership journey at TD. 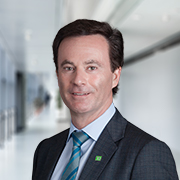 Robbie leads TD Securities' Corporate and Investment Banking business and has shared oversight for Equity and Debt Capital Markets as well as Global Transaction Banking. Prior to this role, he was the Vice Chair and Head of Global Equities. Robbie's industry knowledge, markets acumen, and client-centric approach are valued by clients and colleagues and have meaningfully shaped the global business landscape. He is an avid developer of the industry's future leaders, retaining an active role in the firm's recruiting and mentoring initiatives.