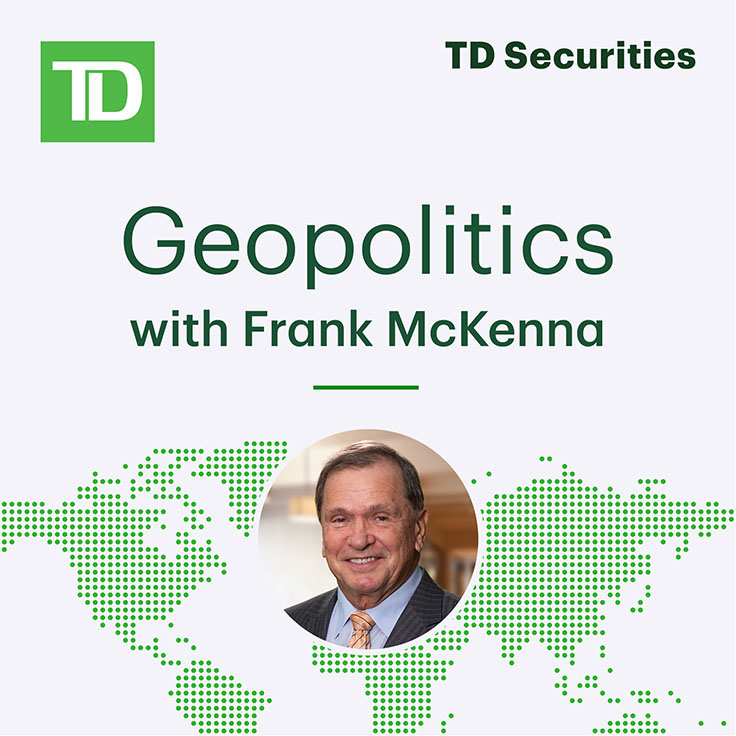 Frank McKenna, Deputy Chair at TD Securities and former Premier of New Brunswick and Canadian Ambassador to the United States, discusses geopolitical issues of the day in this monthly series.

Frank McKenna, Deputy Chair at TD Securities and former Premier of New Brunswick and Canadian Ambassador to the United States, discusses geopolitical issues of the day in this monthly series.

Donald Trump and His Legal Woes

In Episode 34, Frank breaks down the legal woes of Donald Trump and is left to wonder "is it possible to be President of the United States while in jail?" Of all the cases in front of Trump, Frank believes the innocuous situation of the Mar-a-logo documents may possibly be Trump's biggest legal risk. Frank discusses the implications of a split Congress, indicating that the topic is top of mind with investors and corporate clients post mid-term elections. He is closely watching the Georgia run-off for the 100th Senate seat as a Democratic victory would reduce the influence of Joe Manchin and other senators at the end of the spectrum, allowing the Democrats greater control of Senate Committees. Turning to Canadian politics, Frank contrasts his view against his colleague, The Honorable Rona Ambrose, who believes that the new Premier of Alberta, Danielle Smith will win at the next provincial election.

In Episode 33, we listen in on a special interview with The Honorable Rona Ambrose conducted at our 23rd Annual TD Securities Portfolio Management and Market Structure Conference held on November 3, 2022. Rona tackles several important topics on the minds of Canadians including the leadership race in her home province of Alberta and the 411 on the Federal Conservative Party's new leader Pierre Poilievre. While Rona's Conservative Party background differs from Frank McKenna's Liberal upbringing, the two former leaders hold a mutual respect for one another. That said, we look forward getting Frank's take on Rona's view that both Danielle Smith and Pierre Poilievre are electable.

The UK's Lost Trusst in its Leader

In Episode 32, Frank addresses the rhetoric from Alberta's new Premier Danielle Smith who he believes will need to tone down the message in order to be electable next May. The theme of inflation is prevalent, with Frank touching on rising mortgage rates, OPEC's politically motivated decision to cut production and its impact on U.S. mid-terms and the mess caused by U.K. Prime Minister Truss' hugely inflationary and now unwound mini-budget. Frank admits that Russia-Ukraine is at a stalemate with no runway for an off ramp, as they head into winter. Despite all the negative press, Frank talks about his positive outlook on the world as whole, acting as a reminder to take a step back when we are overwhelmed by an endless stream of negative news headlines.

In Episode 31, Frank and Peter catch up on world events, including the war in Ukraine and Putin's saber rattling over nuclear weapons, the changing political landscape in Europe and the U.K., the U.S. mid-terms and the Conservative Party's new leader in Canada. Frank provides a view from Cap Pele of the damage from Hurricane Fiona, which he considers to be the strongest storm to hit landfall in Canada in recorded history. He also shares his perspective on why U.S. leaders are unable to change the narrative on immigration -- from one of vitriol to one of need given changing demographics . Peter asks Frank his favourite fishing story from New Brunswick's famous Miramichi River and the two of them finish up with the Blue Jays as we head into the play-off run.

In Episode 30, Frank McKenna, Deputy Chair, TD Securities, examines geopolitical issues south of the 49th parallel, starting with Nancy Pelosi's controversial trip to Taiwan and the Chinese Government's reaction. Frank also touches on Merrick Garland's decision to search Former President Trump's Mar-a-Lago residence, and how it impacts Republican perception of the Department of Justice. In another take, while it was a good month for President Biden, Frank comments on whether those positive developments will move the needle on Biden's approval rating. Frank concludes the episode with an update on the abortion vote in Kansas, including a surprising stance in a traditionally red state.

In Episode 29, Frank McKenna covers a wide range of topics including the difficulties of air travel and who should be held accountable for Canada's position as one of the worst countries for on time flight arrivals. Frank discusses the peaceful overthrow of the Sri Lankan government and warns that other emerging countries such as Honduras, Brazil and Guatemala are on his watch list at risk of similar uprisings. He discusses Boris Johnson's exit from UK politics and his reaction to the Bank of Canada's 100 basis point increase in its benchmark interest rate. Finally, he weighs in on the January 6th hearings and whether the Department of Justice will in fact charge former President Trump with a crime for his actions surrounding the January 6 riot.

War, Inflation and the Supreme Court

In this episode, Frank McKenna, Deputy Chair, TD Securities, takes aim at the highly politicized Supreme Court now that the Republicans are holding a supermajority. How will a very right-wing agenda of reforms to climate change, abortion, and gun laws sit with the majority of Americans, and what does it signal about the Supreme Court? Frank also addresses potential land mines that could be triggered in the Ukraine-Russia war, and cites feedback from business leaders and politicians on the hot topic of inflation and the looming threat of a recession.

In this episode, Frank McKenna, Deputy Chair, TD Securities, is joined by the Honourable Rona Ambrose. Together, they cover a host of election issues across North America, including the Conservative Party Leadership Race, the Ontario Provincial Election, and the bombshell announcement of Jason Kenney's resignation as Alberta Premier. Frank also touches on the recent tragic events in Uvalde, Texas. He expresses his views on gun reform in the U.S., and he outlines whether this event will be a ballot issue in the upcoming U.S. midterm elections. In another discussion, Rona does not believe the leaked Roe v. Wade decision, or recent gun violence, will impact Canadian elections in the coming months. On the global front, Frank offers his perspective on the war in Ukraine, and megatrends that are on the horizon, including energy, agriculture, and pharmaceutical independence, as well as deglobalization. Inflation is also a main talking point, as politicians everywhere confront this topic for the first time in 30 years.
This long-form podcast contains incredible insights from former political leaders that remain connected to the current geopolitical landscape. It is a must-listen for investors who are trying to navigate critical events in the day-to-day markets.

Holding the West together

In this episode, Frank McKenna, Deputy Chair, TD Securities, tackles the political implications of long-term inflation. He reminds listeners of the 1970s and 1980s when inflation was the number one ballot issue in Canada. Frank also provides a high-level perspective on the war in Ukraine, indicating that the West is "draining the swamp" by isolating Russia and cutting off its lucrative supply of energy to Europe. Frank goes on to highlight how Emmanuel Macron's victory over Marine Le Pen, the far-right presidential candidate in France, reduces the risk of a split with the West. Frank details how this could also impact the search for alternative energy solutions, including nuclear energy. Frank concludes the episode by offering sound advice to corporate executives regarding the ESG debate, making an important connection to Ukraine's sovereignty.

In this episode, Frank McKenna, Deputy Chair, TD Securities, takes a post-mortem look at the G7 Leaders' Summit held in Brussels over the weekend. Frank suggests that Biden's comments on the regime change in Russia were unhelpful and may be forgotten. He also analyzes Russia's retreat from Kyiv, hinting that if Russia is acting rationally, this may signal a potential end to the conflict. With Russia facing ongoing ostracization from the Western World, Frank believes Canada should take a leading role in reshaping the global economy, with an important nod to C.D. Howe. Frank concludes the episode by examining the recent Liberal-NDP deal, and what it means for Prime Minister Trudeau's next move.