Back to Employee Giving page 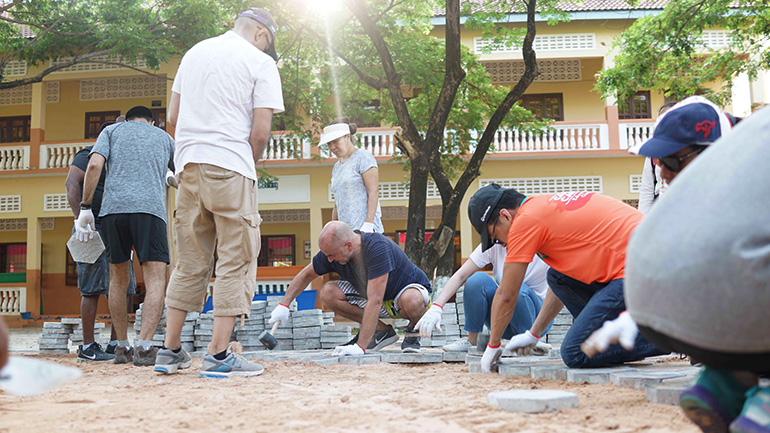 "Having been to Cambodia a couple of times, it was a privilege for us to return as a team to make a difference to the environment in which the kids learn because it has such an impact on them and their entire community," said Selvam. "Our colleagues also bonded with each other and built friendships that go beyond the workplace."

When Patricia Selvam’s first volunteer trip to Cambodia to improve an elementary school’s grounds by gardening and paving a walkway was over, she left feeling like there was still so much more she could do.

Selvam, a Senior Marketing and Admin Manager at TD Securities in Singapore, first went to Cambodia with a group of colleagues in 2016 to update the school’s infrastructure in the impoverished village of Bakong. She and her colleagues worked in conjunction with Caring for Cambodia (CFC), a non-profit organization that betters the lives of Cambodians through improved access to childhood education. By the end of the trip, recalls Selvam, the relationships she and her colleagues had formed with the locals made it clear they would be returning.

"Having been to Cambodia a couple of times, it was a privilege for us to return as a team to make a difference to the environment in which the kids learn because it has such an impact on them and their entire community," said Selvam. "Our colleagues also bonded with each other and built friendships that go beyond the workplace."

Many of Cambodia’s villages are mired in poverty after being torn apart by war and political turmoil. Bakong is no exception. The village is located in a rural area where most students have to travel more than an hour each way to attend their daily classes. Often, families in this area are unable to afford sending all of their children to school, leaving some behind.

"The challenges the children of Cambodia face are daunting," said Jay Jobanputra, Managing Director and Regional Head, Asia-Pacific, TD Securities. "What many of us take for granted – clean water, a toothbrush, transportation or the four walls of a classroom – is a dream for most children of this nation."

After the first trip to Cambodia, TD Singapore’s Charity Committee worked with CFC to better understand what the village needed for a longer lasting impact. Together they determined three priority projects: the refurbishment of a school library, the purchase of bicycles to help students get to and from school, and a clean water filtration system for the entire village.

Soon after, more than 700 sets of toothbrushes and toothpaste were donated, and Selvam and her colleagues raised a remarkable $20,000. The amount was enough to finance all three projects.

Armed with building supplies and excitement to reconnect with their local friends — 20 TD volunteers embarked on their second trip to Cambodia in April 2018.

What was once a single school building with a thatched roof and no walls has now grown into multiple classrooms with improved infrastructure, including study huts, playgrounds, a cafeteria with a meal program, health services and a library. The school has become a central part of Bakong village where residents and parents can learn about health, well-being and the importance of education.

"Enrollment has increased dramatically as families no longer have to worry about the costs associated with sending their children to school," said Natalie Bastow, Chief Operating Officer, Caring for Cambodia. "Grades, attendance and drop-out rates have also improved thanks to the bicycles that make commuting from the countryside less burdensome."

This article was originally published in TD Newsroom.