Back to Geopolitics Podcast

Donald Trump and His Legal Woes

In Episode 34, Frank breaks down the legal woes of Donald Trump and is left to wonder "is it possible to be President of the United States while in jail?" Of all the cases in front of Trump, Frank believes the innocuous situation of the Mar-a-logo documents may possibly be Trump's biggest legal risk. Frank discusses the implications of a split Congress, indicating that the topic is top of mind with investors and corporate clients post mid-term elections. He is closely watching the Georgia run-off for the 100th Senate seat as a Democratic victory would reduce the influence of Joe Manchin and other senators at the end of the spectrum, allowing the Democrats greater control of Senate Committees. Turning to Canadian politics, Frank contrasts his view against his colleague, The Honorable Rona Ambrose, who believes that the new Premier of Alberta, Danielle Smith will win at the next provincial election.

This podcast was originally recorded on November 25, 2022. 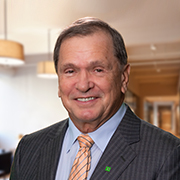 As Deputy Chair, Frank is focused on supporting TD Securities' continued global expansion. He has been an executive with TD Bank Group since 2006 and previously served as Premier of New Brunswick and as Canadian Ambassador to the United States.