Heavyweights in mining weigh in on current trends impacting the sector

Industry leaders Rick McCreary and Greg Barnes offer their take on the outlook of the current mining and metals landscape. Host Amy Van Arnhem leads a discussion that answers why, over the next decade or so, it may be difficult to avoid a supercycle for metals prices, how the transition to a low-carbon economy is astronomically impacting supply and demand and the ramifications for the future of the sector to attract capital.

Amy is responsible for providing holistic cross product global coverage to senior executives for Canadian institutional clients. In her role she manages stakeholder relationships by promoting a collaborative and integrated approach across the firm. In 2007, Amy joined the Sales and Trading rotational program at TD Securities where she gained exposure in Asset Securitization, Proprietary Equity, and Institutional Equities. In 2008, she joined the Institutional Equity Sales desk team where she covered Canadian equity clients.

Greg joined TD Securities in December 2005 as the firm’s base metals analyst. He currently covers the Canadian large capitalization base metal, gold, and fertilizer mining companies and has been an equity analyst for 21 years. Prior to joining TD Securities, Greg worked as a mining analyst for several Canadian independent brokerage firms. He has a strong background in the mining industry, having spent two years with Kennecott Canada, a subsidiary of Rio Tinto, and four years with Falconbridge Ltd., where he was involved in corporate development and marketing. 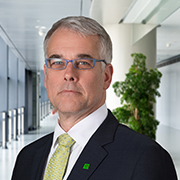 Rick has over 30 years of experience in the resource sector as a principal in executive and board roles with various corporates, as well as a financial advisor in investment banking. On the corporate side, Rick started his career with Gulf Canada as an exploration geophysicist, later working for Noranda in engineering, technology development, technical services, and metals marketing. His most recent corporate role was directing corporate development activities at Barrick Gold as Senior Vice President Corporate Development, where he led over US$1.5 billion in non-core asset divestitures. In investment banking, Rick is currently Deputy Chair, focused on senior client relationship development with C-suite executives and board of directors.