ETFs: Past, Present & What's Next

In this episode, we tackle what is arguably the greatest financial services innovation of the past 30 years. Join Peter Haynes and Andres Rincon as they discuss the ETF industry as we know it. Listen in to learn about the key drivers impacting ETF growth, unique events that have battle-tested the ETF structure, and whether the ETF market in Canada is truly oversaturated. 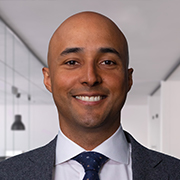 Andres Rincon heads ETF sales and strategy at TD Securities. His ETF team advises both institutional and wealth investors on the ETF landscape and strategies, publishes a broad array of ETF publications, and works with TD's ETF market making team in facilitating ETF orders. Andres joined TD Securities in 2008, first managing credit risk for the dealer, and later as a member of the Equity Derivatives division. He later took on the task of expanding TD Securities' ETF sales and strategy platform. He is also a Chartered Market Technician (CMT).

This podcast was originally recorded on August 4, 2022.